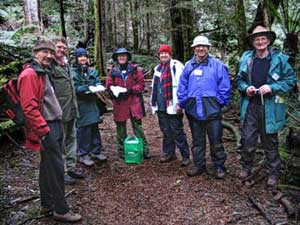 Some members of the FNCV Fungi Group.
Photographer: C. Page

The Kingdom of Fungi is often referred to as the 'Forgotten Flora' or 'The Hidden Kingdom'. These terms greatly undervalue the important role fungi play in our environment. Imagine a world void of fungi. In such a world fallen trees, dead leaves, animal carcasses and all other spent waste organic matter would litter the planet. Thanks to the invisible activity of fungi, with some aid from other decomposers, all this waste material is recycled. Fungi also form important symbiotic relationships with most plants and some animals, without which their competitive advantage would be greatly reduced. 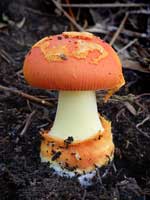 The aim of the FNCV Fungi Group is to make the Kingdom of Fungi more visible by widening people's knowledge of fungi in the field. Through our activities we hope to improve the knowledge and understanding of the distribution and ecology of Victorian fungi. We do this in the following ways:- 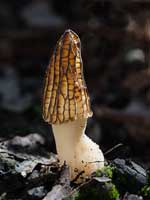 Galerina patagonica
Photographer: J. Hubregtse
The Field Naturalists Club of Victoria promotes the conservation of our environment. Picking mushrooms for consumption, on whatever scale, does not fit in with this goal and is not permitted during any of our forays. Limited picking for study, educative purposes, and the collection of herbarium voucher specimens is permitted under our present permit. In general this should be performed as inconspicuously as possible, without visible damage to the surroundings.

The Committee calls for applications for the next round of funding from the FNCV Environment Fund.

Applications for this round of funding close Monday 17 April 2023.